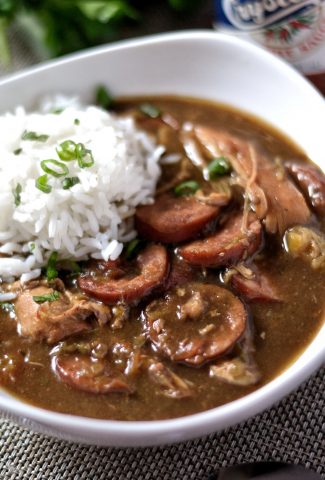 Gumbo is one of the most famous and most popular dishes in Cajun cuisine. It crosses all class barriers and appears on the tables of the poor as well as the rich. For those who are unfamiliar with gumbo, it is a savory stew made with a variety of meats or shellfish combined with vegetables and herbs. Ingredients do vary from one recipe to the next, depending on what part of Louisiana you’re in, but the most popular types of gumbos served today are either seafood or chicken and sausage.

The first documented reference of gumbo appeared around the turn of the 19th Century. The name derives from a West African word for okra, suggesting that gumbo was originally made with okra to get the stew-like consistency. Today, most people make a roux as the base for their gumbo, and the okra is optional.

Making a roux is an art in and of itself, but don’t let that intimidate you. It’s actually quite simple, but it can turn into a disaster if you’re not careful. And by careful, I mean you have to continuously stir the flour and oil mixture until you get it to the desired color. If you don’t stir it or you walk away and forget about it, the roux will burn and you will have to start the entire process all over, which will be extremely frustrating.

I remember many occasions when I was a child of my mother making gumbo and burning the roux. She is a church going woman and you would swear she just stepped off of the USS Sailor because of all of the “F” bombs that would come out of her mouth every time she burned the roux. Even though I still make my gumbo roux from scratch, you can now thankfully buy pre-made roux in a jar at most grocery stores if you’re in a hurry or don’t want to take the chance of burning it.

They are typically found in the Cajun section of the grocery store or near the spices. Don’t worry about which brand you should get. All roux’s for gumbo are a combination of oil and flour, so there isn’t any difference between the brands sold in the grocery store.