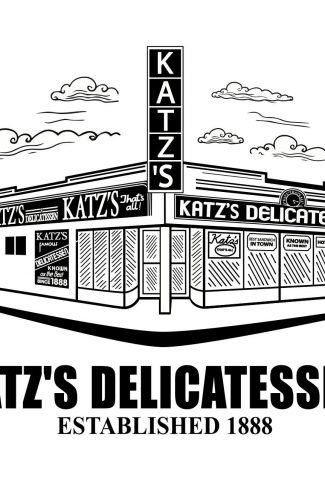 In 1888, a small deli by the name of Iceland Brothers was established on Ludlow Street in New York’s Lower East Side by the Iceland brothers. Upon the arrival of Willy Katz in 1903, the name of the store was officially changed to “Iceland & Katz”. Willy’s cousin Benny joined him in 1910, buying out the Iceland brothers to officially form Katz’s Delicatessen. Their landsman Harry Tarowsky bought into the partnership in April 1917. Katz’s Deli was moved across the street, to its present location, during the construction of the subway system. The vacant lot on Houston Street (pronounced “House-ton” after a Dutch emigrant of the same name) was home to barrels of meat and pickles until the present storefront facade was added between 1946-49.

Each week thousands of visitors from around the world flock to Katz’s to dine in this legendary deli, and to feast on the most delectable sandwiches, platters and meats. But it’s really New Yorkers have made Katz’s Delicatessen what it is, making Katz’s an inherent part of the city’s culture and history. They enthusiastically spread the word, brought their friends in, wrote books, shot films, and kept coming back for a pastrami on rye.

Building a reputation on longevity alone is nothin’ to brag about, which is why they’ve built theirs on quality. Now that’s somethin’ special. They only select the best cuts of beef for their corned beef, pastrami, brisket, and other fine foods. Their corned beef and pastrami is cured using a slower method, which best flavors the meat, without injecting chemicals, water, or other additives to speed the process.

Their finished product can take up to a full 30 days to cure, while commercially prepared corned beef is often pressure-injected (or “pumped”) to cure in 36 hours. Yep, you read that right. 30 days vs. 36 hours. Now, which sounds like the better meat to you?