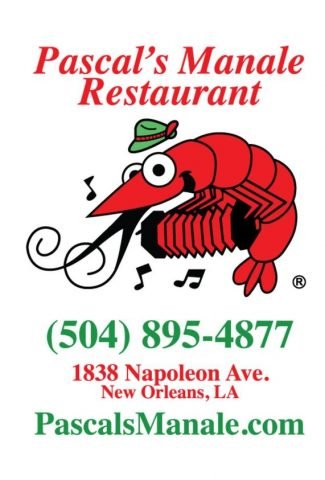 In 1913, Frank Manale bought a corner grocery store at Napoleon Avenue and Dryades to open Manale’s Restaurant.   From the beginning, Manale’s was a family affair.  When Frank Manale died in 1937, Pascal Radosta took over sole management of Manale’s Restaurant.   Many years later, Pascal wanted to add his name to the restaurant.  To honor his uncle, he kept “Manale” and the restaurant became Pascal’s Manale Restaurant. Pascal knew everyone in town; Politicians, famous people, families.  Pas, as he was affectionately known, was loved and respected by many in New Orleans and could always be found in Manale’s.

In 1988, Virginia DeFelice, Pascal’s youngest daughter, purchased Pascal’s Manale from her sister Frances.  Until recently, The DeFelice family owned and managed the 100 year old restaurant. The restaurant still sits quaintly on its corner of Napoleon reminding its neighbors of a quieter time in New Orleans History.  No one can argue that Pascal’s classic BBQ Shrimp and Raw Oyster Bar served next to a traditional Veal Marsala or Parmigiana are the perfect collection of New Orleans Creole and Italian cuisine.

For over a century, Manale’s has specialized in seafoods, traditional Italian dishes and thick juicy steaks.  The 1940s brought citywide recognition to Manale’s for their Oysters Rockefeller, which Manale’s still serves by the dozen with the option of ½ & ½ Oysters Bienville, an equal contender to the oyster lovers palate.

The 1950s brought the infamous BBQ Shrimp to Pascal’s Manales.  A good friend of then owner Pascal Radosta, Vincent Sutro was a frequent visitor to New Orleans to play the horses and eat at Pascal’s.  He came in one night raving about some dish he had eaten in Chicago.  He explained it to Jake, and he recreated this dish with his Louisiana spin and put it in front of Vincent to try.  When asked if it was the same, Vincent said NO, it is better.  Pas loved it so much, he immediately put it on the menu.  The rest is history!

Pascal’s Manale is renowned for its raw oyster bar, its famous BBQ Shrimp and traditional Italian Cuisine.  All these New Orleans delicacies can be found at Manale Monday  through Saturday for dinner.  Manale’s also opens for lunch Monday through Friday and serves a BBQ Shrimp poboy made by hollowing out the end of a French bread and pouring peeled shrimp and that addicting sauce.