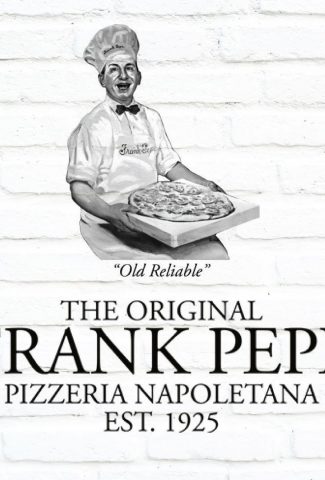 We spent the 2021 Christmas/New Years in Connecticut and the Big Apple visiting my brother and sister-in-law. They’re in Stamford, CT for a few months and we used that as an excuse for a holiday vacation. We arrived on Christmas Day and before making our way to NYC, we spent the checking out New Haven, CT. There was a big debate between my brother and sister-in-law about the best East Coast pizza they’ve had. My brother is a big fan of John’s of Bleecker St. and my sister-in-law loves Frank Pepe’s Pizzeria. We had not heard of Pepe’s Pizza, but apparently, it’s a big deal! So, we made the 1-hour trip (5 people stuffed into a Toyota Corolla) from Stamford to check them out.

We arrived in New Haven around 10:40 a.m. They open at 11:00 a.m. so we had some time to walk around what is known as “Little Italy”. There are literally 8 – 10 Italian places in a 2-block distance. I knew this place was going to be great when I saw 20 people standing in line before they opened their doors on a cold December morning.

This place has been around since 1925 and is one of the oldest and best known pizzerias in the country. The New Haven, CT location is the original, but they now have 11 additional locations throughout the east coast. Frank Pepe was born in Maiori, on the Amalfi Coast. He immigrated to the U.S. in 1909 at 16-years old and after fighting for his native Italy in WWI, he married and settled in New Haven, CT.

Pepe’s Pizza originated the New Haven-style thin crust pizza which he baked in bread ovens fired by coke. Coke is a byproduct of coal and it was used extensively until the late 1960’s when it became unavailable and they then transitioned to using coal to fire the oven.

After working at a few other restaurants, he ventured out on his own by establishing his own bakery and in 1925 opened Frank Pepe’s Pizzeria. They initially offered only two options – tomato pie and anchovy pie. The Original Tomato Pie is still offered today. Several family members still work at Pepe’s Pizzeria all these years later. The big standout for my sister-in-law was their famous tomato pie. She just raved about the flavor of the tomato sauce they use. And after having it, I can see why she loves it. The Italian tomatoes they use to make their sauce really stand out from other tomato sauces.

In addition to the Original Tomato Pie, their signature pizza is the White Clam Pizza and it has been served for the last 60 years. It is topped with fresh clams, grated pecorino romano, garlic, oregano and olive oil.

We never made it to John’s of Bleecker St when we were in NYC, so I can’t honestly say which place is better. But Pepe’s Pizzeria was pretty damn delicious, so John’s has some big shoes to fill in order to get me to change my vote.